From the Writing Cave: Short-Lived, but Inspiring

Welcome back to the Writing Cave, Readers! I am super excited to be sharing this post with you. I'm actually surprised that I'm sharing it. Especially since my previous posts have all been about putting my focus on the Xiphis sequel. It's all good and fine. This post is just to share a small idea I've had since November 2020.

I no longer have it public, but back in November I was very active on TikTok and made a video version of a short story. I was inspired by a filter that was going around. I made the video without much thought. Took it down after a few weeks. The story-video was titled "The Secret Angel" and it was pretty much about a princess who saw a need and chose to take action. Rather than ignore it, like her mother. 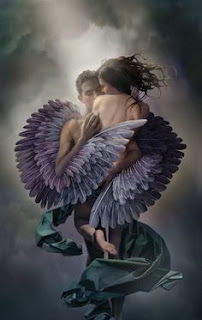 I still have a lot to do in terms of outlining, but the world is created. I'm not going to put this story into any of my current worlds because it is not part of them. There is nothing in this story linking them Xiphis, Anerathia/Æmienix, or Kurii. It's not even part of another world I have, which doesn't even have a name yet.

What I have right now is a mix of Beauty and the Beast meets Phantom of the Opera. I mean, that's pretty amazing, in my opinion. Everyone loves these stories, separately. Mixing them together just feels EPIC. I've already gone and found some stock images for cover art. Because I'm wild like that. But I will not be sharing any of that until later. No, the art shared here (left) is not an inspiration for the story. I didn't want this post to be plain-Jane.

Anyway, back to the TikTok - I deleted it. But I plan to outline the story and share it on Wattpad. So, that's coming soon! I will have a full blog post with details about the plot and the characters. But for now, the focus is still the Xiphis Saga.